“For me the game has always been about individual artistry and collective brilliance”: Hart

Stephen Hart is pragmatic, but he’s also an idealist.

While head coach of the Canadian men’s national team, his sides were difficult to break down, but they also looked to build from the back, possess the ball and have his players express themselves.

Now, given the chance to be the first head coach and general manager in the history of HFX Wanderers FC, Hart has no plans on changing his style or his approach.

“I’m under no illusions. In the professional game it’s about getting the result, but for me the game has always been about individual artistry and collective brilliance,” Hart said as he was introduced at a press conference at Wanderers Grounds in Halifax.

“Most of you who know me, you know I like a certain type of game and I will not apologize for that and I will not change that. It comes down to the players. It’s not going to be about me. At the end of the day, players bring the product to the field, they’re on the stage and they are the ones who are are going to have to perform.” 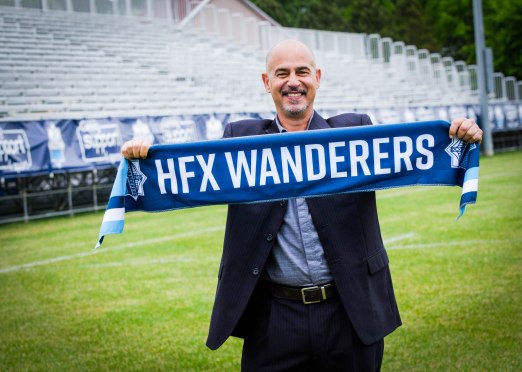 Hart, 58, previously managed the Canadian and Trinidad and Tobago national teams. He coached in Nova Scotia for more than a decade before earning a coaching post with Canada’s under-17 team in 2001 and steadily climbing the CSA’s coaching ranks. He has lived in the Halifax region for nearly 40 years.

Derek Martin, founder and president of Sports & Entertainment Atlantic and Wanderers FC president, said it was vital to find the right person to helm the soccer operations side of the club. When Martin began to look into bringing professional soccer to Halifax, Hart’s name kept coming up in the local soccer community. He feels that Hart is the perfect fit for the job.

“It was very clear to me that he had the respect of the soccer people in this community, which is obviously hugely important, but what was a real pleasure for me was getting to know Stephen,” Martin said. “It wasn’t just his soccer acumen and what he knew about the game — that’s obvious… that goes without saying — what I really enjoyed was getting to know the man.

“The man represents what we want our club to be. He has a passion. He has a purpose. This is his community, just like it is all of ours. He chose to live here. He chose to make this his home, to build a life here and start a family here. He wants this club to succeed on the pitch, but he wants this club to succeed for this community. That’s what really drew me and made me believe that Stephen is the right man for this job.”

It has been 18 months since Hart was fired as the head coach of his native Trinidad and Tobago. After being away from his wife and three daughters for long stretches at a time during the post, he returned to Nova Scotia and took a break.

“I thought I would take some time off and see if a project would come up that I could really sink my teeth into,” Hart said. “I met Derek and he was very convincing and very enthusiastic about doing this. Of course, it’s in a region that I’m very familiar with, where I feel at home and where I feel like a big part of the soccer landscape.”

After being a manager in international soccer for 10 years, Hart is looking forward to returning to club soccer and building his program from the ground up.

“That’s really the most appealing part. Of course these things take time and sport is not known for its patience,” Hart said.

“I tell players and I told the organization that I would like everyone to focus more on the process rather than results, because if the process is right it eventually leads to some sort of continuity and consistency. That usually leads to results.

“I think the organization is going to go about things the right way. They understand that this is new and we’re now getting off the ground. We have a good understanding of what we want to see and the product we want to put on the field.”

Hart has a clear vision for the kind of players and kind of team he wants to put on the pitch for the Wanderers’ inaugural season in the spring of 2019. He spoke about building a spine of the team — from the keeper through the centre of defence and midfield to the front-man — that is “very special and has good qualities.” He also stressed there needs to be balance within the team.

“I know the type of player I will be looking for and the type of players that will blend into something,” Hart said. “I have always told the coaches, when I had provincial teams, when in doubt select enthusiasm. Enthusiasm got me to take the job. I fed off of Derek’s enthusiasm. Regardless of how talented a player is, they have to bring their passion to the field and to the team.”

The focus of the CPL is developing the Canadian player and that is obviously something Hart is passionate about. Still, he believes that drawing the right foreign players to the league can help speed along that development and enhance the league.

HFX Wanderers FC are starting from scratch. There is a ton of work to complete to get a coaching staff and training facilities prepared for their first season. There are big picture, long-term goals, but for now he feels it’s going to be a lot of hard work just to get the first team ready for that first season.

“We have a relatively short time period to put a team together and get it functioning and then it’s baby steps,” Hart said. “We would love to engage the community of course. We have strong youth programs in the region. It’s our job to communicate and interact with those community programs to see how we can best work together.”

Until Iceland made it’s debut this year, Trinidad and Tobago was the smallest nation to ever qualify for the World Cup. And yet Hart made his professional debut in the local professional league straight out of high school. Those opportunities have long been lacking for young Canadian players.

“We are the only country remaining that is trying to qualify on the world’s stage without a professional league,” Hart said. “In my time period it was a big problem. What would happen is that young players by the age of 19 or 20 if they didn’t get an opportunity in Europe or maybe South America/Latin America they would be out of the game. Now you have an opportunity to increase your player pool, provide opportunities for many talented players and hopefully they stay in the game longer, use the league to learn to be professional and develop and then move on to bigger and better things.”

It’s big for all Canadian players, but it will also stoke the ambitions of players in the region and across Atlantic Canada. The Wanderers are the first professional team in Atlantic Canada since the Nova Scotia Clippers played one season in the Canadian Soccer League in 1991.

The initial hirings have proven that there are no straight lines to becoming a head coach in the Canadian Premier League. Still, Hart’s path was less direct than most.

Born in San Fernando, Trinidad, Hart received his first cap for his country in 1980 just before he joined friend Jeff Agostini at St. Mary’s University in Halifax. He earned a degree at St. Mary’s and applied for a post to work in environmental resource management to work at preserving Trinidad and Tobago’s coral reefs. The job never came, he stayed in Halifax, married his wife Lynn and never left.

Hart acknowledged George Athanasiou at the opening press conference. Athanasiou founded King of Donair soccer club in 1983 along with Nick Garonis and Takis Mitropoulos. In 1988 he convinced Hart to assume coaching duties in addition to playing.

King of Donair became the dominant amateur club team in Nova Scotia and won national medals in 1994 and ’95 before finally winning the Challenge Cup in 2001. Five King of Donair players — including Ante Jazic — played for Canada at one level or another. That success, to say nothing of his eight years working as technical director of Soccer Nova Scotia, earned him a job with the Canadian Soccer Association in 2001.

He progressed up the ranks and became Frank Yallop’s assistant with the men’s national team. When Yallop returned to Major League Soccer in June of 2006, Hart was elevated to interim manager. The 2007 Gold Cup team beat Costa Rica and put on a show in ousting Guatemala 3-0 in the quarter-final. They famously lost the semifinal to the United States when Atiba Hutchinson’s injury-time equalizer was incorrectly flagged offside.

“The players at the time were at a very good age and they were all playing regularly at their respective levels and it was a good moment for a lot of the players. We had a good balance,” Hart said. “The approach of how we played the game, I have always tried to play that way. I do understand that the objective is to win the game. You don’t get any points for style. I’m not going to change. That is just how I do things.”

Hart’s side played some of the most attractive soccer the national team had ever seen, but it wasn’t enough to earn the full-time post. Instead, Dale Mitchell took over in the run-up to the 2010 World Cup. Once again Hart took over on an interim basis in April of 2009, guided the team to a winning record at the Gold Cup and this time earned the full-time post in December of the same year.

In the 2014 World Cup qualifiers, Hart’s side never found the high level that  ’07 Gold Cup, but Canada under Hart was pragmatic and hard to beat. They only lost twice in a 16-match span and had conceded three goals in 11 qualifying matches. Then they went to San Pedro Sula only needing a draw to reach the hexagonal and the rest is history. Honduras won 8-1 and Hart resigned two days after the match.

Still, Hart won 20 matches, drew 10 and lost 15 in his time in charge of Canada. He had a winning record with Trinidad as well. They drew Mexico and didn’t lose a match at the 2015 Gold Cup, going out in the ninth round of penalties against Panama in the quarter-finals. They qualified for the hex with a match to spare, but he was fired after the second round of matches in the hex in November of 2016 after T&T lost 2-0 to Costa Rica at home and 3-1 in Honduras.

Local fans will get to see Hart in action when he guides a team of under-23 selects from across Atlantic Canada for a friendly against the under-23 team of newly promoted Germany Bundesliga side Fortuna Düsseldorf.

Hart will get a week to train the young players and get to know them and see their qualities.

“I’ve been looking at them and I know most of the players. Really it’s more of an outing for the fans, than anything else,” Hart said of the friendly. “It does allow me to see how some of these players — if they’re selected — how they respond to an opposition that are going to be well-prepared and have spent a lot of time together and are mature — even though they’re 20 or 21 years old.

“It gives me a measuring stick to see who can step up and who looks the part.”

The match will be played on Saturday, July 28 at 4 p.m. local time and Wanderers FC members have exclusive first rights to tickets.