It took almost 92 minutes for the people of Saskatchewan to start to grow emotionally attached to the Sask Selects soccer team.

At the start of their debut friendly match against Calgary Foothills FC on May 4 in Saskatoon, the crowd of 3,067 at SMF Field were curious on-lookers. By the end — right around the time Nikolas Baikas hit a 30-yard blast off the crossbar in added time — the crowd groaned in unison as the Selects comeback attempt came up inches short.

“Near the end, you could see that people were really invested and it wasn’t just a day out kind of atmosphere. They were actually invested in the game,” Baikas said. “A lot of people were asking me ‘when is the next game?’ and it wasn’t just people that I knew through soccer. They said they really enjoyed it and these were people who never really watch football or soccer.” 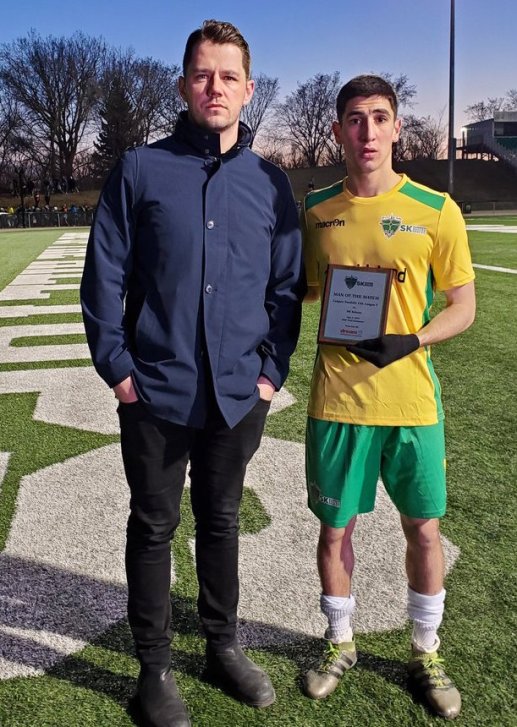 Nikolas Baikas, right, accepts his Man of the Match trophy after the Sask Selects 2-1 to Calgary Foothills FC in Saskatoon.

In the end, Foothills — the defending PDL (now USL League 2) champions — prevailed 2-1, but as far as debuts went it was a strong crowd on a chilly night as the top players in the province showed that there is quality on the pitch in Saskatchewan.

“I thought it was really, really cool. It was nice to see that people wanted to come out and watch,” Baikas said. “It definitely exceeded my expectations. I wasn’t sure how we would do, but a lot of people came out and they were cheering. It was really cool to see in Saskatoon because none of us have ever had that. We are all kind of like ‘oh where did these people come from? I guess they are here.’

“I got a lot of people messaging me and saying that not only was the game good, but they enjoyed the experience and had a good time.”

Now the Selects will get another tough test as they prepare to face the Vancouver Whitecaps U23s on July 25 at 7:30 p.m. once again at SMF Field at the Gordie Howe Sports Complex.

The Saskatchewan Summer Soccer Series offers a run of matches for the top players in the province and a chance for the market to prove its worth to the new Canadian Premier League and the prospective investors behind a Saskatchewan CPL club.

Canadian under-20 keeper Thomas Hasal from Saskatoon is a member of the Vancouver Whitecaps in Major League Soccer.

Having a local club to play for is something most young players in Saskatchewan never dreamed possible. The Whitecaps have their own Saskatoon connection. First-team fullback Brett Levis finished his career with the University of Saskatchewan Huskies and has now played 20 MLS matches. Thomas Hasal joined the Whitecaps residency program in 2016 just before he started Grade 12 and the 19-year-old keeper has five under-20 Canadian caps. This fall Hasal signed a first-team contract with the Whitecaps.

“A decision like that to leave your family is never easy,” Hasal said. “It wasn’t an easy decision, but at the same time, I couldn’t say no. It’s what I worked for and dreamed of for a long time.”

His friend Niki Baikas can relate.

In the Selects’ debut match, Baikas scored their first goal and was named Man of the Match. Baikas, 22, is coming off of a freshman season with the University of Saskatchewan Huskies where he led the team in goals (four), assists (six) and points (10). That earned him a spot on the U Sports All-Rookie team.

That hometown success came after a year each in Uruguay and Greece trying to make a breakthrough far from home.

His father Markos Baikas is Gymnastics Canada’s National Junior and Age Group Coach. That led to opportunities for Nikolas on the pitch when his father travelled east to work with gymnasts.

He trained with the Toronto FC academy for a few weeks when he was 16 and also trained with the ANB Futbol academy thought a connection with Sask Selects coach Percy Hoff. He also got connected with Jorge Amura and the Clarkson Soccer Club in Mississauga. It was only about a week’s worth of training sessions, but Baikas clearly made an impression with Clarkson.

“Every season or so (Jorge Amura) would send a handful of players that he thought might have a chance to go to Uruguay and play football there,” Baikas explained. Canadian national team members Lucas Cavallini and Jonathan Osorio were both Clarkson SC products and both went to Nacional in Uruguay when they were young.

“It had been quite a while, more than a year, since I had been there and Jorge contacted me and said if Nik would like to go, we could send him to Uruguay and it was a week’s notice before I graduated from high school and all of a sudden off I go to Uruguay,” Baikas said.

It happened so quickly that Baikas wasn’t even sure which Montevideo club he was going to be with until he arrived in the capital.

It turned out he was headed to Danubio back in 2015 — one year removed away from winning their fourth Uruguayan title.

“It was a bit of a scary experience at the start, but it ended up being good. It was good that I ended up in deep water there,” Baikas said.

Baikas has a great touch and good feet. His technical base kept him in good stead on his travels and has helped open doors for him, though as he adds “I was able to do almost everything at that level, but obviously there is lot of other things that go into gameplay.” He felt when he got to Uruguay it was his soccer IQ that was lacking a little and that was the area that improved the most once he was there.

“I was definitely able to play at that level, but I was also definitely behind for the first little bit,” he said. “The pace and the quickness of the game and the quality of the players around me was pretty incredible. So many of those players that I played with and against in Uruguay are playing at the U20 World Cup right now or there are guys in Europe, South American championships… I played with Joaquin (Ardaiz) and he plays with Thomas (Hasal) now at Whitecaps. It’s pretty cool and to see what they’re doing through social media is pretty insane.”

Hasal said that he believes that there are other players in Saskatchewan who are good enough to be professionals and play at a higher level.

“Everybody always talks about how we’re from Saskatchewan and a lot of people think we shouldn’t really be able to compete, but you go off and you realize that you can do more than compete,” Hsasl said. “If we can do it I don’t see why other players in Saskatchewan couldn’t too.”

“After I left, I really started to appreciate how good the players are here,” Baikas said. “We kind of go off thinking that we have no chance. As good as I feel I am or some other guy in Saskatchewan is, you go overseas and you figure it’s day-and-night and they’re going to play you off the park. But I realized after I had gone that there is a lot of really good talent, not only in Canada but from Saskatchewan as well who are able to play at that level.

“When you’re surrounded by so many good players you start to pick up good habits. They do that when they’re young, but just being in that environment you adapt quickly.”

Baikas was with the under-20s and the reserves with Danubio but had a long wait to get his paperwork sorted out. He was invited to stay, but he wasn’t really covering his expenses and felt maybe an opportunity in Greece would be better.

The next season he signed with Ethnikos Piraeus F.C. — one of the six founding clubs of Greek football, who are currently playing in their third tier. While he has Greek ancestry, he isn’t a citizen and didn’t have a passport. Again, the process was slow. While Baikas waited for his paperwork to come through half of the season had already been played and more players were brought in to fill the role he was hoping to earn.

He decided to return home, go to school and start playing consistently. In addition to playing in U Sports, Baikas also played in the PDL in 2018 with WSA Winnipeg.

“What the Saskatchewan Selects gives us that we’ve never had before is something to strive for. You have players all over the world playing for contracts every day,” Baikas said. “We don’t have that competition, so people lose motivation or they just don’t get that exposure and end up playing at a lower level than they probably are able to.”

Hasal said that even if Saskatchewan had a CPL side, he still would have pursued his goal of reaching the MLS and playing for Vancouver, but that having a CPL team in his hometown would have given him a “something more present” and another goal to look forward to.

“I think it would be really important to not only have a CPL team in Saskatchewan and giving players that option to play there, but also using that as a stepping-stone to move on. We have two players on our MLS team,” Hasal said. “If we have a CPL team, I guarantee you the gap would be much closer. A lot more players would have that opportunity.”

Looking ahead to the 25th Hasal would love to have the opportunity to play for the Whitecaps in his hometown.

Hasal missed all a month of action with an injury to the AC joint in his shoulder in a friendly, but he resumed light training in the last week of June and was hoping to be match fit in time to be available for selection when the U23s head to his home province.

“It really depends on the club, but I will be healthy by then and it’s important for me to get some minutes, so it would be the perfect scenario,” Hasal said.