Grant’s high praise for Forge FC’s technical director and head coach is far from unique. When Forge FC steps onto a Canadian Premier League pitch for the first time Saturday they will have 13 players in the squad who played under Smyrniotis at the Sigma FC academy.

Grant was 16 when he went to a Sigma camp and then joined the program in Mississauga.

“I was struggling a bit and I went over to Sigma and it benefitted me a lot. It changed my life,” said Grant, 25, a right back with Forge FC. “In terms of position-wise and understanding the game, they taught me a lot of things that I wouldn’t have learned elsewhere. He’s the reason I started playing right back, so that changed a lot for me and opened a few doors.”

Grant had switched clubs in successive seasons as a teen, but found what he was looking for at Sigma. 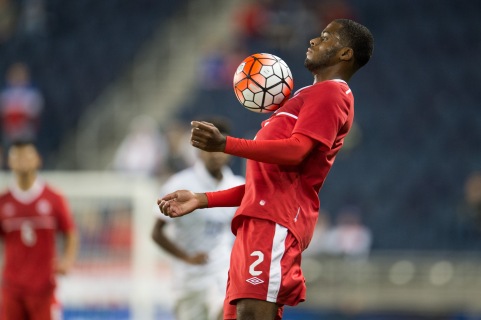 Jonathan Grant playing for Canada in CONCACAF men’s Olympic qualifying in 2015 against the United States.  photo courtesy of CanadaSoccer/Mexsport

“At first I was just playing to play really, but when I went to Sigma they put that end goal in sight for me in terms of what I wanted to do with it. So I had something to aim for to get to the next level,” Grant said. “That was never really in the picture for me before I went to Sigma. It gave me something to work towards.”

His hard work took him to a college in Arizona before signing in the USL, first with FC Montreal and then with Swope Park Rangers in 2016. There he started the conference final and then the USL final itself where Swope Park lost to New York Red Bulls II.

Grant isn’t alone in giving credit to Smyrniotis and Sigma for playing a significant role in helping them reach their potential and achieving their goals at the next level.

“It opened my eyes to a lot of things that I already appreciated in the game,” Forge FC captain Kyle Bekker said about his introduction to Sigma FC at a camp when he was 15. “It was what I needed to succeed. Obviously being a smaller player on the field, you need to be very technical and play faster with the ball in that sense. There was the bigger side of the game that I wasn’t really learning at the time. So it was a perfect fit.”

The Forge players are hoping that a Sigma family reunion is part of a perfect fit in Hamilton as the CPL prepares to kick-off its inaugural season Saturday (1 p.m. ET, Tim Hortons Field, CBC).

Forge features seven players who played with Sigma FC last season in League1 Ontario where they posted 11 wins, four draws and a loss.

At 28, Bekker is Forge’s elder statesman. He last played for Sigma in 2009 before departing for Boston College, but he jumped at the chance to come home to the CPL and play for Smyniotis once more.

“I was a no-brainer for me because of everything that is a part of it,” Bekker said. “It’s coming home. It’s another chance to work with Bobby. There was a good group of guys that I knew were going to come in from the get-go. That was always exciting. Just the chance to be a part of something from the ground up.”

So what is it about Smyrniotis as a coach and his approach to the game that makes him special?

“He’s an exciting guy to play for,” Bekker said. “When you hear him talk about the game it’s hard not to get fired up. You want to go out there and put his vision on the field and be successful. I have a lot of belief in him, if he says ‘run’, you run and if he says ‘jump’, you jump and hopefully we can get that mentality throughout the 11 and we’ll have success.” 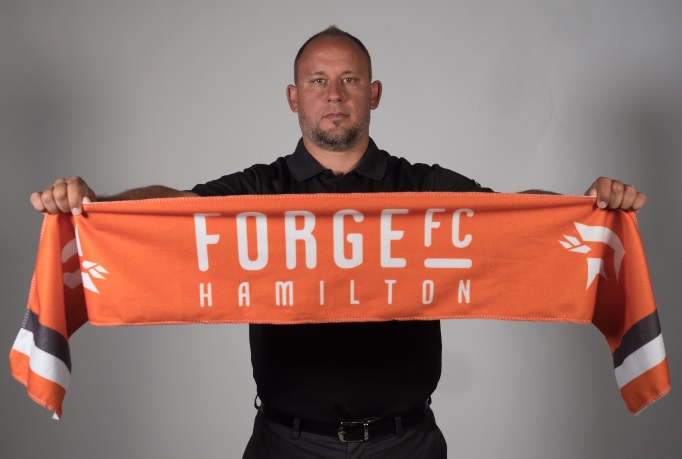 Smyrniotis’ blueprint of aggressive, attack-minded soccer should endear the men in orange to Hamiltonians this summer.

When Grant returned to Sigma FC in 2017, he netted seven goals from his right back position. Some of that is down to his previous life as a striker, but also speaks to the freedom to press and attack Smyrniotis gives to his fullbacks.

“The philosophy is attacking football. It’s fun to watch,” Grant said. “In terms of culture and philosophy Forge and Sigma) are similar, but I think he’s raised it to the next level in terms of intensity and preparation. The little details are at a higher level.”

As one of the players who has played at a higher level, Bekker was focused on being a leader well before he was given the armband.

After being drafted third overall by Toronto FC, Bekker made 29 appearances for TFC in two seasons before moving to FC Dallas and then the Montreal Impact. In 2017 he played under Marc Dos Santos for the expansion San Francisco Deltas as they won the final NASL title. Last season he was in the USL with North Carolina FC. He scored seven goals in 33 appearances and also tallied 13 assists and completed 81 per cent of his passes.

The CPL is Bekker’s fourth different league in four years — all without leaving North America — and he hopes this move is much more long-term. His travels taught him a lot. He feels the Deltas’ ability to come together as an expansion team from scratch and win a title sets out a good template for what Forge needed to do in the months leading up to the season to be ready to fulfill this potential.

“That was a brand-new team that was starting from scratch,” Bekker said. “That’s a good experience that I can relate to this and help new guys, especially guys that are coming from out of town. (You want to) just try to get them settled as soon as possible and make them feel like they’re at home. It’s a big part that I don’t know if a lot of people take into consideration. You move in, you’re in a hotel, you don’t really have a place, you don’t have a phone, a bank account, all that stuff. How are you supposed to focus on your job day-in and day-out? If we can make that as easy as possible for those guys, then they can get acclimated and start to enjoy the city and be happy. And then that translates to what we’re doing on the field.

“That’s just one of the many things I’ve learned over my years and I’m just trying to impart some wisdom.”

He also wanted to make sure it was a group effort. Forge left back Kwame Awuah is 23 and keeper Quillan Roberts is 24. Roberts spent last season in MLS with Los Angeles FC and Awuah made 10 MLS appearances with New York City FC. They, like many other young players in the CPL, are coming from situations where they were young players learning the ropes, but will now need to teach their teammates what it means to be a professional every day.

“It’s a pretty unique situation,” Bekker said. “I’ve been telling some of the guys who maybe have MLS experience, whether they’re 22 or 24 or whatever it may be, you’re a veteran on this team now and they have to step up.

“We still have a bunch of players where this will be their first year of pro, so it’s just a matter of doing the day-in, day-out professionalism side. It’s getting to know that stuff — how this is your job now — and taking care of your body and all of that that comes with it.”

There still hadn’t been a ball kicked, but considering he had been through MLS, NASL and USL, it seemed only fitting to get Bekker’s view on where he saw the level of play in the CPL heading into its first season.

“It is a high level. There are a lot of people in good positions in this league who are going to put a decent product on the field,” he said. “It will be something we can be proud of and I have no question that we’re going to be good here in Hamilton.” 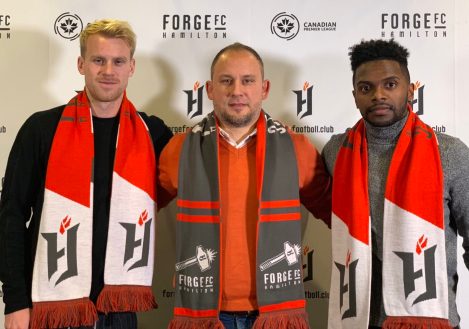 There is a lot to like about Forge. Emery Welshman scored once and drew two penalties as Guyana beat Belize 2-1 in CONCACAF Nations League qualifying to earn their first trip to the Gold Cup this summer. While Welshman leads the line, Chris Nanco and Tristan Borges will help spur the attack. Senegal international midfielder Elimane Cissé will compliment Bekker, while Cameroonian international Bertrand Owundi will be asked to anchor the backline with Awuah and Grant. Forge also boasts Belgian defender Daniel Krutzen and Swedish midfielder Alexander Achinioti Jönsson.

Forge FC is one of three clubs who can earn the CPL’s spot in this year’s CONCACAF League. The winner of the continental tournament advances to the CONCACAF Champions League proper. Beyond the obvious focus of topping the table at the end of the 10-match spring season and advancing to the CPL final in October, Forge is also focused on being the first CPL team to face foreign competition in a meaningful match.

“Some might say it’s a little unfair to other guys, but to be honest I don’t really care,” Bekker said of Forge being selected to vie for the CONCACAF League spot. “We were put in the situation and if it was the other way I’m sure they would be trying to grasp it with both hands too.

“It’s a short spring season, but there’s a lot on the line. We have to take advantage of that because it will never be any easier to get into (CONCACAF play) than it is this year.

“We have to take advantage of it. That’s been communicated since day 1. We need to be going right from the start.”