John Herdman achieved his first two main objectives in charge of the Canadian men thanks to a 4-1 win over French Guiana in Vancouver to conclude CONCACAF Nations League qualifying.

The win confirmed what was already a near-certainty: that Canada would be in the Gold Cup this summer and that they would be in Group A when the Nations League proper debuts in the fall.

None of their other Nations League foes can say the same on either count, which only further underscores that the side under Herdman is still awaiting its first real test.

Which isn’t to say that there wasn’t a touch of adversity to the proceedings at BC Place.

The Canadians insistence on playing out of the back and through the teeth of the French Guiana press led to some uncomfortable moments and a string of ill-advised passes resulted in Sam Piette leaving a final back-pass short and Kévin Rimane tackling the ball off of Canadian keeper Milan Borjan before Rimane slotted an equalizing goal into an empty net 36 minutes in.

It could have been a demoralizing moment for a Canadian side that had been firmly in control up to that point, but instead, they regained their lead three minutes later. 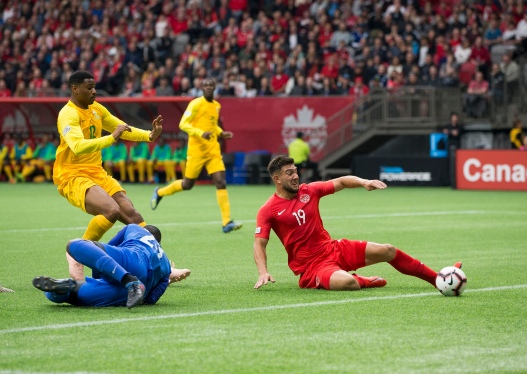 Lucas Cavallini slides in to guide the ball in the net for the game-winning goal as French Guiana keeper Jean-Banuel Petit-Homme and defender Alain Mogue could only look on. photo courtesy Canada Soccer

Jonathan Osorio made a savvy switch to find Jonathan David in space down the right and Lucas Cavallini slid to meet his cross to cap a flowing Canadian move.

Junior Hoilett had opened the scoring after throwing a ball in off of Mark-Anthony Kaye’s back and to himself, he surfed across the French Guiana back line and scored after a give-and-go with Atiba Hutchinson.

Hoilett turned provider for the third goal as he sprung David for a breakaway against a suicide-high line buy the visitors. The 3-1 goal came two minutes after they retook the lead and French Guiana never recovered.

A Kaye cross found Cavallini is loads of space to head in his brace five minutes into the second half and cap the scoring.

A poor effort from the Canadian wall didn’t do Borjan any favours on a second-half free kick, but the veteran keeper was able to get down to parry the free kick at full stretch.

Hutchinson took his bow in the 71st minute as the Canadian captain left the pitch on home soil for the final time in his storied career.

While it is a new generation of Canadian talent coming through, French Guiana was also looking to the future with most of its biggest names like Ludovic Baal, Sloan Privat and Roy Contout absent. Only three starters from French Guiana’s 4-2 loss to Canada at the 2017 Gold Cup started in Vancouver: Rimane, Rhudy Evens and Jean-David Legrand. Five of the starting 11 failed to make their 23-man Gold Cup roster.

The Canadian team is starting to take shape. Despite having an abundance of attacking options, the trio of Cavallini, David and Hoilett made a statement that they will be hard to displace. 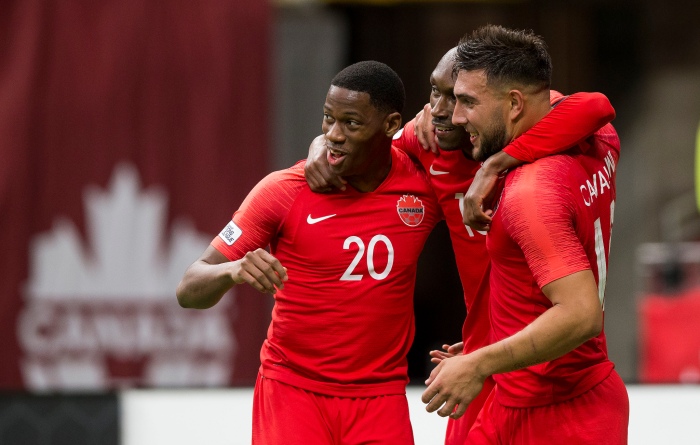 For the third time in his five matches in charge, Herdman paired Derek Cornelius with Doneil Henry in the centre of defence as the new Vancouver Whitecaps teammates patrolled their home pitch. Zachary Brault-Guillard, on loan with Montréal Impact from Olympique Marseilles, started his second straight match at right back.

Alphonso Davies, who has started three of the four qualifiers at left back, was out with a mild right knee injury. That meant that Kaye, the LAFC midfielder, got a run-out as a fullback. Ashtone Morgan remains the only natural fullback to start on the left side of the backline under Herdman, with Sam Adekugbe making his second appearance off the bench Sunday. Marcel de Jong has also made an appearance at left back under Herdman.

The win over French Guiana came a year to the day from Herdman’s debut — a 1-0 closed-door friendly win over New Zealand. They have out-scored their opponents 19-1 in five matches, but know that a large step up in class awaits them moving forward.

Canada’s unprecedented depth should hold them in good stead this summer at the Gold Cup. Between those matches and Canada’s Nations League Group A meetings with Cuba and the United States in the fall, Herdman should have his best XI locked down by the time World Cup qualifying comes around.