Rob Friend was 27 when he became the fifth Canadian international to play in the German Bundesliga.

His journey to the highest levels of the game began when he left Kelowna to continue his soccer career at a pair of NCAA schools.

Friend is hoping that the creation of the Canadian Premier League and his Pacific Football Club on Vancouver Island will help streamline the pathway for young players to chase their dreams. 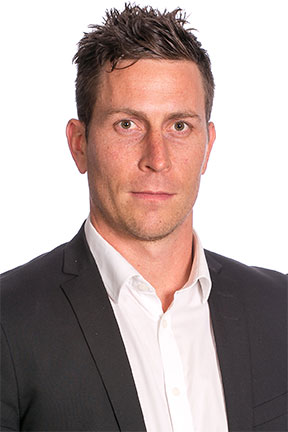 “(The CPL) would have been a game changer for me. Growing up in Kelowna — Josh Simpson on the island — guys like us had to take a difficult path and at the end of the day we got lucky,” said Friend who is the executive director of Pacific FC. “In the modern game right now in Canada I think it’s almost more difficult to make it to the professional level. Far too many kids are falling through the cracks. Far too many kids aren’t getting the opportunity to play week in and week out in a professional environment.

“This is going to better our national team and it’s going to better our young players. I believe I would have a had a longer — and maybe more successful — career had I started earlier versus going off at a later age to university and if I had had the opportunity that we’re trying to bring to the younger players.”

Friday Pacific FC launched at the E&N Roundhouse in Victoria.

“I’m looking forward to growing this club and making it work because I truly believe in it,” Friend said.

Friend and Shillington spent a lot of time searching for the right community in British Columbia to launch their team and ultimately decided Vancouver Island was the ideal spot as Simpson came on board.

“Obviously with us living in the lower mainland that’s a path that we looked into,” Friend said. “Like anything, you have to look at the pros and cons about every market and we felt strongly that Vancouver Island should be a founding member for 2019 and that the island deserves a professional CPL team.

“We had to look at all of the options and what was there, but ultimately we landed on the island and we’re extremely excited about it.

The team will play at Westhills Stadium in Langford, just northwest of Victoria proper. Friend said they wanted a location that was central to the entire island. It’s 10-15 minutes from downtown Victoria, but also easy to access from Nanaimo and the north.

“Langford is the fastest growing city in Canada. It has a lot of development and growth, there are a lot of young families, so we really like that market,” Friend said.

Westhills Stadium was built in 2009 and currently seats less than 2,000. It is also home to the junior football Westshore Rebels. The stadium will expand to 6,500 for Pacific FC’s debut season in 2019.

“The first thing I said is that if we’re going to do this it has to be a soccer-specific stadium. Playing in Europe I understood how important that was with the right atmosphere that created that soccer culture. The City of Langford got that. They bought into it and they understand that,” Friend said. 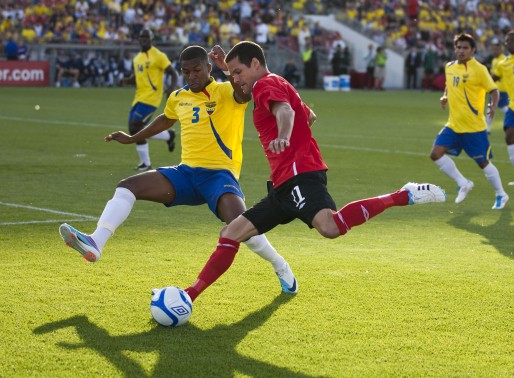 Josh Simpson prepares to deliver a cross against Ecuador during a friendly at BMO Field in 2011. Paul Giamou/Canada Soccer

The club and the City have a partnership to expand and renovate the stadium that sees both parties taking on the cost. The first phase of the expansion will occur on three sides of the stadium by adding 4,000 seats and hospitality suites.

“We will renovate and upgrade the existing grandstand. We’re working on adding two end zone grandstands that will be very steep and intimate. We want roofs to create that great atmosphere,” Friend said. “We have a very unique option that we’re going to do under the power lines that we feel will be a cool amenity to the stadium.

A second phase is expected to occur in “the next couple of years” that would add 4,000 more seats to get capacity above 10,000. 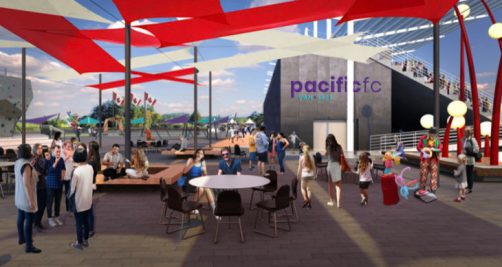 Artist rendering of the covered plaza at Westhills Stadium.

That second phase will involve the removal and relocation of a BC Hydro pole that is near midfield, not far from the pitch, and currently prevents the addition of a grandstand on the north end of the stadium.

The venue has hosted Rugby Canada events in the past and the Al Charron Rugby Canada National Training Centre is adjacent. Westhills currently features FIFA-approved Field Turf, but will have a grass surface as part of the renovations.

“Rugby Canada has a world-class facility, there’s a $10M high performance centre that they just built with offices. So they’re central to Westhills and we’re looking to do the same and set up our offices there. We have a few more announcements to make in terms of expanding the training facilities that will be very exciting for the local community and our team,” Friend said. “It’s going to be a world-class venue with the stadium and what we have planned to create all of the training facilities and that’s something the community will have access to.”

The Pacific FC crest features a Douglas Fir and a trident. The tree is bordered by a chevron that represents an ocean wave and is a V that represents Victoria, Vancouver Island and victory.

Friend studied business economics as he starred at the Univ. of California Santa Barbara. He graduated and turned professional with Moss FK in the Norwegian second flight. He moved on to the top flight in Norway, then the Netherlands before signing in Germany with Borussia Mönchengladbach in 2007. He scored 18 goals, finished second in scoring in the 2 Bundesliga as Mönchengladbach won the league and was promoted to the top flight. He would spend seven seasons in Germany. He played one season with LA Galaxy, but concussions cut his season short and he retired at the age of 33.

In the past four years he’s run a real estate company and co-owns Urban Soccer Centre, an indoor soccer facility in North Vancouver.

Simpson was born in Burnaby, but grew up in Victoria playing in the Lower Island Soccer Association.

At the launch he related that he went on trial in the Czech Republic at 14 and was offered an academy deal that he ultimately turned down. Instead he also played in the NCAA and didn’t make his debut professional debut in Europe until he was 21.

The first club membership of Pacific FC was given to every 14 year old on the island. That will continue as each year, on their 14th birthday, youth across the island will be granted club memberships.

Simpson was a key member of the 2003 under-20 team that reached the quarter-finals at the World Cup. The tricky left winger played in England, Germany, Turkey and Switzerland before a severe broken leg in 2012 while playing for Young Boys Bern ended his career. Simpson is relocating back home with his family after living in Switzerland for the past six years.

Friend and Shillington’s friendship pre-dates Friend’s interest in the CPL, but once he decided he wanted to own a team, he felt that Shillington would make a valuable member of their team.

“At the end of the day this need to be a functioning business to be sustainable. That means you need smart businessmen,” Friend said. “Dean is very smart and also a passionate Canadian. He was sold on growing the game in Canada. He gets it. He loves it and he wanted to get involved. I knew that having a very smart businessman, and passionate sportsman and Canadian would be important to bring to our club.”

Friend and Simpson have a combined 75 senior caps and more than 20 years of experience playing professionally in Europe.

“We want to put our footprint on the soccer culture within the club and that starts with the technical side. We’re absolutely going to be hands-on on the soccer operations side,” Friend said. “We’re looking to build the right culture from top to bottom and we’re looking to build the right culture within our players. That means players that have to be in the community. At the end of the day I’m a competitor and I love to win. I want to build the best team possible while also providing opportunities for young Canadian players. We want to have as many local British Columbia and Vancouver Island players as possible. And then mix in some experience in a team that is competitive and exciting to watch.”

“Because we’re last to launch we’re maybe a little bit behind some of the other clubs, but we have an entire plan on the business side and the soccer operations side that we’re working towards,” Friend said. “Now that we have our name and our brand we’re excited to get out there in the communities across the island.”