Jay Ball felt a big celebration was in order.

FC Edmonton threw a street party Friday night to launch their entrance into the Canadian Premier League. They did it to celebrate their rebirth. They did it for the people of Edmonton and for their supporters who helped create a movement to prove there was a thirst for professional soccer in Edmonton.

They also did it for Tom and Dave Fath, FC Edmonton’s owners, who poured millions into the club in their NASL incarnation simply because they believed their community deserved a professional soccer team.

“I think it takes a lot of courage for our ownership to take this step again. I think what they saw from our fan group is that the support is growing and it’s going to be there,” said Ball, FC Edmonton’s general manager.

“(The launch) gives ownership the opportunity to make a first impression that they never had when they launched back in 2010 with the NASL.

It was hard not to feel good as FC Edmonton supporters marched five blocks down Whyte Avenue — the city’s hub of clubs, bars, restaurants and shops — under police escort on a Friday night waving flags and lighting flares before arriving at the Old Strathcona Farmers Market for the launch.

“(Whyte Ave.) is the best, hippest street in the city. There’s 20-30 bars there and they are all going to be watching this spectacle coming down the street. And people need to see that. I’m a big believer that when you need to say something you should make a statement. I want to give the supporters the opportunity to make a statement.”

The supporters made a statement earlier this year when they helped create a grassroots YEG for CPL movement to prove that there was sufficient interest in the club moving forward.

FC Edmonton didn’t field a first team for 2018 as the NASL took a year’s hiatus (North American sports being rich with leagues who took a year’s hiatus and never returned). Their academy continues to play under the direction of Jeff Paulus, but the future of the first team remained murky until a 40-day club membership drive began in late February.

“(Our supporters) were very clear that they didn’t want to see the club pass away. They have been absolutely spectacular. They created a community and that community became a family,” Ball said.

“We’re thrilled that we’re starting off with a great first impression with all of these memberships.”

Ball wouldn’t reveal how many $40 memberships were purchased during the membership drive, but it made a significant impression.

“Memberships to date — and this is before the launch on Friday — have far, [i]far[/i] exceeded the number of season seats that we sold in the last couple of years,” said Ball, whose team set an attendance record of 3,408 in the 2017 NASL season. “The reason we did it was to gauge fan support. Ownership was adamant that we wanted to see if the fans were going to be there. And they were.”

During the membership drive, each membership was good for one season’s seat, but after Friday’s launch new $50 memberships will be good for up to eight season seats in line with the rest of the CPL clubs. 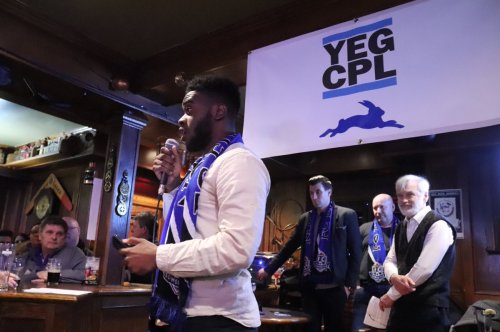 During the launch, FC Edmonton founder and co-owner Tom Fath, thanked the YEG for CPL group and the rest of the local soccer community for rallying around the club.

“To the supporters: thank you so much. Your dedication to the club has been amazing. Thank you to all of those people who have believed in us for the last nine years and will be supporting the vision as we move forward,” Fath said.

While FC Edmonton still has players in the academy and are still playing matches, Fath noted that having a team in the CPL is an important, aspirational piece of the puzzle for the club.

“We are absolutely thrilled to be here, re-establishing our first team. It’s been a long journey until now and it’s continuing,” Tom Fath said. “We’re thrilled to be continuing to support soccer in the city and sport in the city. The first team is a vital component of the pathway. It creates dreams for the youth that there is a possibility beyond and those possibilities are endless.”

FC Edmonton is unique in the CPL so far in that it has an established fan base, a history and a nascent supporters culture. Eddie the rally a rabbit became a symbol of the club — and has even appeared on the collar of their kits — after a jackrabbit ran onto the pitch at Clarke Stadium shortly before FC Edmonton turned around a 3-0 deficit to win a match in 2011.

The rally rabbit became a symbol of the aspirations of Edmonton supporters to stage a huge comeback and rebirth for the club itself.

The club logo features a stylized FCE and a rabbit footprint with the 2010 inception year.

Having a more established structure should help teams like FC Edmonton and Cavalry FC — led by Foothills’ Tommy Wheeldon — navigate the first season.

“Selfishly, right out of the gate, I think we’re in a pretty good position to do what we need to do in the first year,” Ball said. “In sports there’s one goal and one goal only. There’s no participation medal. Our goal is to win. Tom and I are aligned on that.”

While they hope they will have a head start on the soccer operations side of the business, Ball is quick compliment the competition.

“I’ve been at the ownership meetings and one of the things that impresses me around the table is that there is some deep sports experience and some deep soccer experience,” he said. “There’s some former men’s national team members around the table that are part of these (club) launches. Then you have CFL operations in two cities. There’s a real benefit for having everyone around the table to help each other, but I think some of these clubs that have never operated pro soccer teams before might surprise you.”

That experience around the table extends to the board room as well. While the support they’ve received in Edmonton has given the Faths confidence that soccer will succeed in the city, the people behind the CPL have them believing the league will work as well.

“The league itself and the capacity in that league is a game-changer. It really is. That’s what makes the difference. There are sharp people there,” Ball said. “The Canadian Soccer Business is a game-changer as well. It unites the CSA and the Canadian Premier League under one common vision. I’m excited. I really am.”

The CPL has offered what Ball called “unprecedented support” to each club in the lead-up to their launches. When asked about the difference between working with the CPL and their time in the NASL, Ball was unequivocal.

“It’s literally night-and-day,” Ball said. “I spent two years running FC Edmonton within the NASL and having worked with the CPL, it is night-and-day. I can count on one hand the number of times I called the NASL head office for advice or guidance. But the CPL, their entire front office, that headquarters if full of people with deep experience in sports, communications and marketing. And in the soccer world as well. (CPL president) Paul Beirne has a body of work that is unmatched in the world of soccer in Canada from a front office perspective. He’s a huge resource to all of us who are launching across the country.”

Clarke Stadium’s blue seats sit in the foreground with Commonwealth Stadium behind.

The top priority for FC Edmonton after the launch is squaring away their stadium situation. The Eddies have played out of Clarke Stadium since 2012. The city-owned stadium has a capacity of 4,153 which would need to increase to accommodate the club in the CPL. The idea of playing out of Re/Max Field, a 9,200-seat baseball facility whose primary tenant plays for two months in the summer, has also been floated publicly.

“The reality is that Clarke is our home,”  Ball said. “Clarke has been our home for four years. We don’t talk publicly about transactions with the City or any of our vendors. I can tell you that we are at the table with stakeholders following the stakeholder engagement process that the City has put in place. We’re going to continue along that process until we create a win-win situation.”

The club went to the City of Edmonton to discuss expanding the capacity to 7,000, building a permanent dressing room, upgrading to the lighting and an exemption for the CIty’s food and beverage contracts. Clarke has changed drastically over the years, but was once home to the CFL’s Edmonton Eskimos who still use Clarke as a practice facility. The venue is also used by junior and high school football teams.

The idea of making FC Edmonton the primary tenant had many people in the football community up in arms about a possible loss of a traditional football facility. Eskimos president Len Rhodes spoke at the community and public services committee meeting as the debate about the future of Clarke became somewhat fractious.

“It should be made very clear that ownership has never said that we want to displace any sport from that field. Whatever the rumours are, ownership has never said — and I’ve been at the meetings and I’ve been a point person for the meetings with the City and the club — that we want football out. We’ve never said that. That needs to be clear,” Ball said. “Tom is a community-minded man. He wants to be sure that all kids have access to sports wherever they need it. This discussion with the City about creating a stadium that meets the needs of soccer fans that is a narrative that we’re following from the City. We will continue along that line. We have a lot of work to do before the opening game of 2019. I have the feeling that everybody will get to where they need to be.”

Ball believes that the parties need to communicate more, but that there isn’t really any need for fence-mending.

“All of the parties have to get around the table and have a chat. We’ve been having discussions with the City for a number of months and they’ve really all been high-level discussions about ideas: here’s what we need, here’s what the CPL needs from us,” Ball said. “We’ve never felt it was up to FC Edmonton to communicate to other stakeholders in Clarke Stadium. Number one, it’s not our stadium. We don’t own it. The City owns it. I don’t think it’s appropriate for the club to communicate to the stakeholders what we plan to do there until we at least have some sort of nod of approval from the City about what we all want to do. We all need to be speaking the language before we start speaking to everybody.

“The reality is that it sounds like football was caught off guard by some of the information that came out. And I can completely understand that. Len Rhodes, the president of the Eskimos, he’s got to defend his turf. I know Len well enough to know that if I was him and if I got the information in the manner he got it, then I might do the same thing. The reality is that since that time, progress has been made. Communication is happening. I think Tom and I are looking at things as a glass half full and we’ll find solutions and get to where we need to be by the time we play our first game.”