It is safe to say that the first commissioner of the Canadian Premier League isn’t afraid of a challenge.

Clanachan, 56, feels creating the first successful nationwide soccer league isn’t a challenge, but a great opportunity he is eager to see to fruition.

“The exciting part is being able to be involved at the ground floor at the start of something that I think could be very, very big for Canada,” Clanachan said. “For me personally, I think it’s a legacy issue. It’s an opportunity for me to take something I’ve been very passionate about for my whole life and be able to part of a team that will create something that has never existed in Canada. At the end of the day, that’s pretty cool.”

Clanachan has spent his entire working career at Tim Hortons and became president and chief operating office of Tim Hortons Canada in 2014 and was most recently the chairman of Restaurant Brands International, Canada following the 2014 merger of Tim Hortons and Burger King.

Despite being formally introduced on Wednesday, he has been working out of the CPL’s Toronto office for months as he transitions between jobs. He has continued to work for RBI in an advisory role. 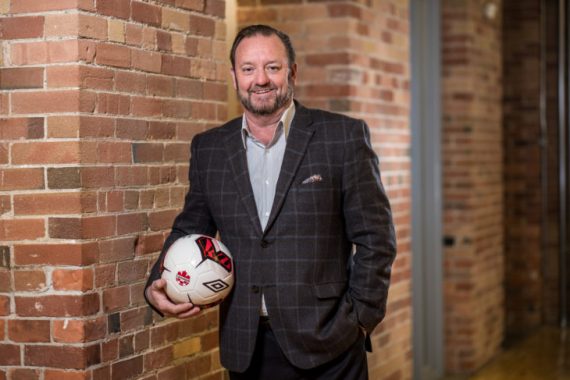 David Clanachan is the first commissioner of the Canadian Premier League. photo by Darren Goldstein/DSG Photo courtesy of the CPL

“I’ve been with the team here — and it’s a great team — since the fall of last year. Truthfully I’ve been more an observer and an advisor than anything else,” he said. “I’m still doing a little of both (jobs), but I’m used to working seven days a week, so it’s good that way.”

When you talk to Clanachan, his passion is evident immediately. He said the idea of being involved in the early stages of the league was what made the commissioner’s job so enticing. He said since he has started in the job he has met potential owners who share his passion for soccer and for the prospects of the league. The chance to “work with people who have great vision, passion, who you know have the right aspirations and dreams” was another reason he was eager to get on board.

Clanachan said he has been exposed to a many sports organizations through their corporate partnerships with Tim Hortons. That extends from grassroots programs like Timbits minor sports for young children all the way up to professional leagues like the CFL, NHL and NFL along with junior hockey and curling.

“A lot of my business acumen came from working with Tims, but I’ve always had a tremendous passion for sports in general. To me this is the perfect intersection of the two things I care the most about — business, and what I learned there, and professional sports,” he said.

Hamilton Tiger-Cats owner Bob Young and CEO Scott Mitchell have both been actively involved with the CPL from the outset and will run the league’s Hamilton team. Both they and the TiCats play at Tim Hortons Field and the duo worked with Clanachan during the naming process.

“Bob Young and Scott Mitchell approached me and said that they would really like someone with the business acumen, who understands what happens nationally across Canada, who really understands product and what you have to put out there for people and who has the passion for the sport as well. And I guess I fit the bill for them,” Clanachan explained.

Clanachan was born in Scotland and moved to Canada at the age of four. His passion for the game — to say nothing of Glasgow’s Rangers — was a large part of his childhood.

He recalls going to the Scotland Club of Windsor and watching matches being beamed in on satellite.

“My dad had to pay my 20 bucks to get me in and he had me promise not to repeat any of the the things I heard from the old men there,” Clanachan said.

Last weekend Clanachan watched three FA Cup matches at home on cable. He has seen the sport come a long way in its popularity in the country.

“This is the perfect time in Canada to launch this premier soccer league. All of the indicators — whether it is demographics or new immigration, positivity around boys and girls soccer right across the county, whether it being the availability of global soccer to people within in Canada — say now is the time,” he said.

The time for the kickoff of the CPL will be April of 2019 when they aim to have between eight and 10 teams open the inaugural season. They currently are talking to 12-15 communities who have an expression of interest in having a team.

“If I could have 12 (for 2019) I would, but those 15 aren’t all at the same place in the process. That doesn’t mean that they won’t be able to come on board at a later date as well,” Clanachan said. “We’re very bullish on the whole thing. We think this is a great time for Canada and this is going to be a great league.”

After a lull in tangible news, there should be plenty of announcements in the coming months between league personnel and club announcements.

“We’re working through a vetting process with the clubs and the owners. Once we are able to finish that off we will start to introduce all of the executive and the key people here at the CPL to the rest of Canada. We have a great team that we’ve put together. Also we will be announcing all of the clubs that we will be bringing on,” Clanachan said.

Those club announcements will be staggered as part of a co-ordinated launch of the league.

“We want to make those announcements as part of a whole community launch as well and not have it be just some guy in Toronto talking,” Clanachan said.

The idea of the club being a part of the community is key to making the CPL work and to that end the creation of CPL supporters groups in communities that have yet to be awarded franchises has been heartening to the league.

Clanachan said that when he was growing up support was largely divided by ethnicity.

“Today it is all about club and the community and grassroots. That’s what soccer needs to be successful. It’s the supporters that make it work,” he said.

Once each potential ownership group has been vetted, what will determine whether a team is ready to take the field in 2019 will largely come down to having a venue in place and a soccer operations plan in place.

Clanachan used two known venues — Winnipeg’s Investor’s Group Field which seats 33,234 and Halifax’s proposed Wanderers Grounds which is expected to have 7,000 seats — as the ends of the scale of venues they are looking for.

Where stadiums don’t already exist, the league is looking at pop-up stadiums. Finding land — ideally centrally located near the city centre — has been a challenge. While finances and venues are key barrier for entry into the league, so too is assembling a staff.

“The soccer operations are the most important in my mind. That’s the product you put on the field, that’s what the supporters are going to get behind,” Clanachan said.

Issues such as salary cap and Canadian player ratios are still being discussed with the founding partners “because we feel that both of those are integral to the success of the league,” Clanachan said. “How we handle that will set the stage for future growth with the league itself.”

CPL teams will play in the Canadian Championship and try to win the Voyageurs Cup. They will face off against the three Canadian Major League Soccer teams in doing so. Clanachan wants to see the CPL teams be competitive with those MLS teams as soon as possible as well as being competitive in the CONCACAF Champions League once a CPL club qualifies.

“We want them to be competitive at that level as well,” he said of the Champions League. “We define success based on what our supporters tell us the product looks like on the field, but also what they can achieve not only across Canada, but also in other competitions that they participate in.

“We have to be realistic about how we approach it, but we expect to have great talent in the league. We expect to be extremely competitive moving forward. That’s the whole idea.”

As for the far off future, Clanachan would like to see the league stretch from sea to sea, with smaller communities fielding teams in a second and even a third division one day with promotion and relegation within those divisions. He knows something of that scale is a long way off, but “if you want to know what my big dream in technicolor is, that’s where I would like to be one day.”