For the third straight Gold Cup, Canada ended the group stage with a goalless draw.

This time it sends them through the quarter-finals instead of sending them home.

Canada and Honduras battled to a 0-0 stalemate that left Canada second in Group A and Honduras looking assured of their own safe passage thanks to their 3-0 forfeit win over French Guiana.

Canada finished group play with five points after beating French Guiana 4-2 to open the tournament and then drew Costa Rica 1-1. It is the first time they have advanced to the quarter-finals since 2009.

“That first game was a big step forward, but these two last games have been a culture, identity and mentality shift,” said Canadian captain Patrice Bernier who is the lone holdover from the 2007 Gold Cup team that reached the semifinals. “I look back at 2007 and it was about the same thing. We won our first game and we only started believing once we got to the second round. Now everything is possible. We know that we were able to get results against Costa Rica and Honduras. Whoever we play in the next round, we’ll be ready for them.

“Now we’re looking to go all of the way. This is good. Like I said, it’s a mentality shift for Canada. This is a first step. We have one objective obtained and now the mission continues.”

It was the first clean sheet of the Zambrano era and it came with three young players who were part of the last Olympic cycle starting in the back: Sam Adekugbe, Manjrekar James and Michael Petrasso.

Canada rode their luck a little as Petrasso cleared a point-blank Alberth Elis attempt off the line as the Canadian marking on corner kicks remained spotty.

James was also fortunate not to be whistled for a penalty when he struck the back of Carlos Lanza’s leg on a challenge in the first half.

Five minutes before time, Borjan spilled a cross and Steven Vitoria spared his blushes by deflecting a goal-bound Carlos Peña shot with his thigh.

While Canada didn’t produce the same flowing football that excited their long-frustrated fans in the first two matches, they still had moments of brilliance. Midway through the second half, Canada strung together 34 consecutive passes — with each outfield player getting a touch on the ball — before Jonathan Osorio’s curling shot was tipped over the bar by a leaping Buba Lopez in the Honduran goal.

Marcel de Jong started on the left side of the midfield in place of Alphonso Davies and flashed a chance just wide in the 10th minute and then hit the outside of the post with a well-hit volley later in the first half. 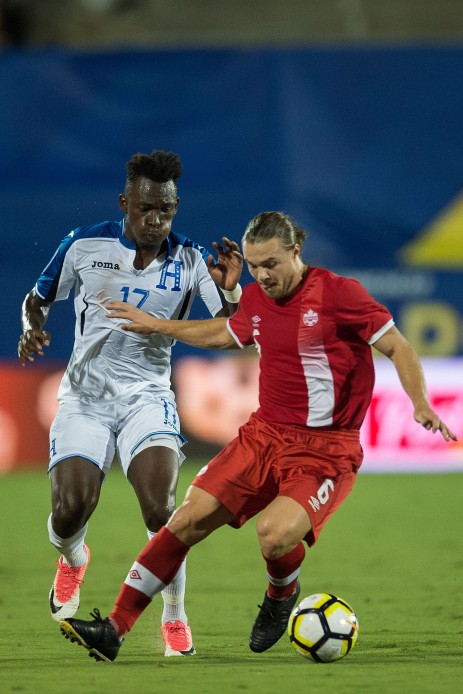 Canadian midfielder Sam Piette, right, turns away from the pressure of Honduran forward Alberth Elis at the 2017 Gold Cup. photo courtesy of the Canadian Soccer Association

After playing three matches in eight days under searing conditions, the Canadians earned an extra day of rest by finishing second and will play the Group B runners-up Thursday in Glendale, Ariz.

“I think we suffered a lot today,” said Canadian midfielder Sam Piette who was a standout for Canada in the group phase. We got two clearances off the line for us where they could have scored two goals there. We attacked as well. We had a couple of chances as well: Marcel’s post in the first half, other chances, Oso’s shot in the second half. I think the game could have gone both ways, but I think a tie was a fair result.”

Canada needed a final moment of brilliance from Milan Borjan to lock up the point. Canadian substitute Mark-Anthony Kaye committed a careless foul on Alberth Elis led to a dangerous free kick opportunity in the 90th minute. Borjan was forced into making a fantastic reaction save off of a Carlos Lanza header from six yards out.