In the early days Major League Soccer, Octavio Zambrano rose from obscurity to become one of the best coaches in the league.

Not only did Zambrano’s teams win matches, but they did so with enough style to win him admirers in the nascent days of the league.

Then, after failing to win a championship with the league’s two marquee clubs, Zambrano’s name had been relegated to the history books of the game in North America.

That will change Friday when the Canadian Soccer Association is expected to introduce the 59-year-old Ecuadorian as the newest manager of the men’s national team. 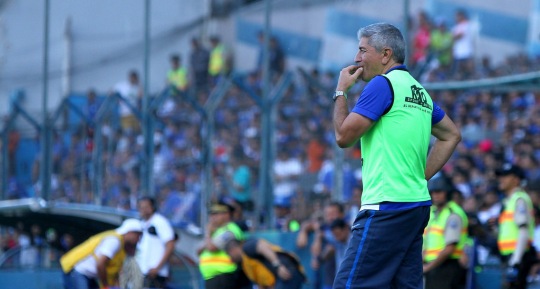 Zambrano came to North America in 1980 to play with Chapman University and he would stay in Southern California for the next 20 years. He played briefly with the Los Angeles Lazers in the Major Indoor Soccer League’s heyday.

His first big coaching break came when he joined the Los Angeles Salsa of the American Professional Soccer League (APSL) as an assistant to Rildo, a defender on Brazil’s 1966 World Cup team in 1993-94.

When Major League Soccer debuted in 1996 he joined the Los Angeles Galaxy as an assistant to Lothar Osiander. Osiander had been the head man for the United States national team from 1986-88. It should make Canadian supporters feel better that Osiander’s full-time job at that time was as the head waiter at Graizano’s, a restaurant in San Francisco, while guiding the Americans to a spot (and a 1-1-1 record) at the Seoul Olympics was his side gig as men’s national team coach.

The Galaxy lost the first MLS Cup and during their second season Zambrano took over as head coach after Osiander led them to a 3-9 start. The Galaxy were 13-7 under Zambrano the rest of the way and made the playoffs.

In 1998 the Galaxy posted a 24-8 record (two of their wins and two of their losses came via the shootout) and won the Supporters Shield. The Galaxy scored an average of 2.66 goals-per-game and were one of the most potent and entertaining teams in MLS history.

Zambrano’s Galaxy teams had a back-four anchored by Robin Fraser (an MLS best XI selection in four of the MLS’s first five seasons), Toronto FC manager Greg Vanney and TFC assistant Dan Calichman. In goal the Galaxy let Jorge Campos go to Chicago and turned to Kevin Hartman (who is second on the MLS games played list) with Matt Reis serving as his back-up.

While the Galaxy were a veteran side, future MLS standouts like Hartman, Vanney, Reis, Clint Mathis and Daniel Hernandez all began to emerge in that 1998 season.

Mauricio Cienfuegos was the Galaxy’s engine. He finished with 13 goals and 16 assists, while Cobi Jones scored 19 times and Brazilian Welton had 17 goals. By the end of the season Mexican legend Carlos Hermosillo was serving as a target forward.

Danny Peña, a holdover from the APSL’s Salsa, sat in front of the back four while the other five forward players attacked in waves.

In the 1998 playoffs the Chicago Fire’s stingy defence won the day against the Galaxy’s potent attack and the Fire went on to win the Cup.

A 2-3 start the next season was enough to end Zambrano’s tenure.

He wasn’t out of work long as he landed in the Meadowlands to take over the MetroStars — a team German newspaper Bild had just dubbed “the worst team in the world.”

The MetroStars had tried everything when it came to hiring a head coach. They tried a big name from the NASL (two-time Cosmos head coach Eddie Firmani), a World Cup winner (Carlos Alberto Parreira), a CONCACAF legend (Bora Milutinovic who had guided three different CONCACAF nations out of the first round at the three consecutive World Cups). They all had losing records and had failed to win a playoff game.

He compiled a 41-8-37 record in three seasons with the MetroStars before being replaced by Bob Bradley.

Zambrano has said that MetroStars president Nick Sakiewicz gave him “total control of the players that were going to be added to the team.”

He quickly brought defender Steve Jolley and midfielder Daniel Hernandez over from the Galaxy and then made his biggest coup when he was able to get Mathis from Los Angeles in a move that allowed the Galaxy to sign aging Mexican star Luis Hernandez.

Octavio Zambrano, left, with MetroStars draft pick Rodrigo Faria at the 2001 MLS SuperDraft. Faria would go on to be the MLS rookie of the year. Getty Images/Ezra Shaw

In 2001, the MetroStars played with a three-man backline, showing some tactical versatility in the way Zambrano sets out his team. They still were set up to attack. While Hernandez and Richie Williams offered some bite in the midfield, Mathis, Tab Ramos and Mark Chung offered plenty of quality. Colombians Adolfo Valencia and Alex Comas led the line. Valencia and Mathis each netted 16 goals in 2000 as the MetroStars averaged two goals-per-game. In 2001 they were joined by MLS rookie of the year Rodrigo Faria who set a rookie scoring record. Mathis had 20 goals and 18 assists in his first 31 games in New York before tearing his ACL.

While Zambrano deserves credit for identifying and deploying his talent, he struggled to shake the perception that he should have done more with the talent he had.

In both 97 and 98 the Galaxy lost a game in the shootout as part of their playoff series loss. This was the NASL-style 10-yard breakaway version of the shootout, not the FIFA spot kick shootout.

In 2001 the MetroStars played three full games before losing their playoff series in sudden death extra time to the Galaxy who advanced to the MLS Cup final.

The Metros 2000 season was marred by an injury to keeper Mike Ammann. MLS golden boot winner Mamadou Diallo from Tampa Bay stomped on Ammann breaking three of his ribs and puncturing his lung in the process. Howard, Ammann’s back-up, was at the Sydney Olympics when the MLS playoff rolled around, so Paul Grafer took the reigns until Ammann played two elimination games in the conference final despite being far from fully fit. (Ammann wasn’t a Zambrano fan, saying “I like (Zambrano) about as much as I like Diallo.” after Zambrano was hired by the Wizards in 2009).

While he has no experience managing a national side, Zambrano and the Galaxy did get a taste of CONCACAF competition. In 1997, the Galaxy reached the final of the CONCACAF Cup (the precursor to the CONCACAF Champions League). The Galaxy beat Santos Laguna from Mexico 4-1 and Luis Angel Firpo from El Salvador 2-0 before beating DC United 1-0 in the semifinal.

The Galaxy lost the final 5-3 to Mexico’s Cruzl Azul despite leading 2-0 after 14 minutes thanks to a pair Eduardo Hurtado goals.

In 2001 the MetroStars also took part in the final season of the Copa Merconorte. They split their two matches with Venezuela’s Deportivo Italchacao, but lost both legs to Colombia’s Millonarios who went on to lift the cup.

Zambrano’s MLS resumé is strong. He turned around two big market teams with high expectations in one season. He won a Supporters Shield and reached a CONCACAF final in four full seasons. His .587 winning percentage is second-best in MLS history (though Patrick Vieira is closing in with his success at NYCFC) behind Bruce Arena amongst coaches that have at least a full season.

His teams also failed to even reach an MLS Cup final despite all of their regular season success and their playoff failings are hard to ignore.

Even harder to ignore is the fact that he didn’t get a single interview for an MLS head coaching vacancy in the four years after he was fired in New York. Many MLS management decisions are baffling, but that feels like a red flag. When he was hired again, he joined Tiligul in Moldova to get a taste of European football.

He also took over at FC Tatabanya in Hungary and won a lot of games with the financially floundering Deportivo Pereira in Colombia — two teams that had just been relegated from their respective top flights. In between he worked for FIFA and served three seasons as an assistant to Peter Vermes in Kansas City from 2009-11. Most recently he did some punditry in Ecuador before taking over El Nacional, one of the historic clubs of the country, for one season. This year he took over Delfin, who were in last place in the Ecuadorian first division and pulled them safely into eighth place without being able to add any new players. He was let go at the end of the year.

His CV in the past decade doesn’t make him a likely candidate for a national team post. However, if this was 15 years ago, hiring Zambrano would be a coup. His reputation in North America seems to have suffered as much based on lack of opportunity as a lack of success.

There is plenty to be skeptical about. His lack of success or sustained work at any of his recent stops isn’t reasurring. In MLS he failed to reach an MLS Cup with some teams brimming with talent. He is inheriting a Canadian side that will not be the most talented team in the region and instead will be looking to be more than the sum of its parts.

There are positives. He has always had an immediate positive impact on the fortune of his teams. Unlike, Benito Floro before him, Zambrano’s command of English is flawless. He has a reputation for being studious and a straight-shooter.

He has worked with players from North America before and has some experience in the region. He largely had veteran MLS teams, but his young players flourished and he wasn’t afraid to give them opportunities.

He also put in years in the grassroots of the game in California and anyone with a mind for youth development programs and nurturing elite talent on the individual level would be most welcome.

After three years of a manager who didn’t seem to believe in his own team, Zambrano should at least be attack-minded, proactive and looking for his team to impose themselves on the game.